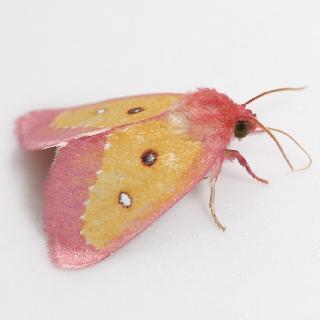 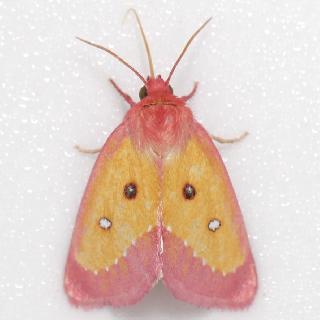 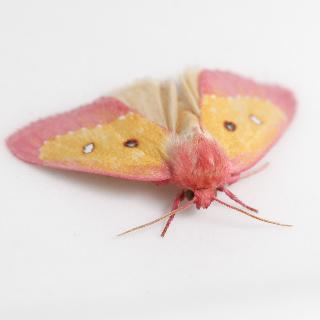 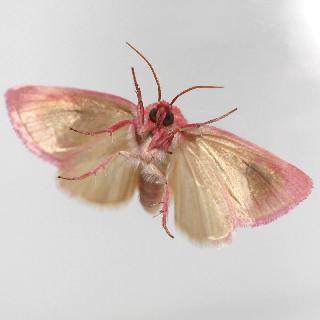 This rarely collected species has been recorded twice on Block Island: 15 August 2017 and 18 August 2022, both at the Hunt property. Recent photographic records of this species on BugGuide and iNaturalist are mainly coastal, from southern New Jersey to Cape Cod, though there are also several inland records from Rhode Island, Massachusetts, New Hampshire, and Vermont. The species occurs along the coast south to Georgia (James Adams, pers. comm. 23 viii 2022), and there is an apparent photographic record from Archbold Biological Station.

While only one species in the genus is currently recognized, DNA barcoding indicates there are multiple species in the eastern US. Barcoded specimens from MA and VA (BOLD:ACD0198) are separated from each other by 0.8% sequence divergence. Specimens from Oklahoma (BOLD:ACN8643) are separated from the East Coast specimens by 1.7% sequence divergence. Individuals from Archbold and near Jacksonville, FL (BOLD:ACN8459) all barcode within 1% of each other and are separated by more than 3% from the other two BINs.

Careful analysis of barcode data in conjunction with photographic records online suggest there may be as many as five or even more species of Derrima. According to James Adams, the coastal species found mainly in the Northeast is true stellata, and a species found in Florida and north at least to Georgia is Derrima henrietta (Grote, 1864) (pers. comm. 23 viii 2022). D. stellata flies in late summer, as all heliothines do in the Northeast, while D. henrietta flies in spring. The orbicular spot is usually smaller than the reniform in stellata, and the black border around it is usually thick, sometimes occluding the white entirely. In henrietta, the orbicular is larger than the reniform, and both spots have a thin black border. Additionally, henrietta is larger than stellata (James Adams, pers. comm.), and the white dots forming the PM line are generally much larger in the former as well. At least one additional species occurs in the south central US; I do not know whether a second synonymized name, cinocentralis, applies. Individuals photographed in the Edwards Plateau in Texas [1, 2, 3, 4] lack the orbicular spot, and the reniform spot is small or absent. Dates of observation are 17–20 May. Records of the genus from Oklahoma [1, 2, 3] may represent yet another species, which is similarly patterned to stellata but flies much earlier (dates of observation 2–7 June). Two singular individuals with photographs online are more difficult to place. There is a single photograph on BugGuide of a Derrima from the Ozark Mountains in Arkansas, 23 June 2011; this individual lacks both the orbicular and reniform spots and could represent another species or a possibly disjunct population of the Texan species. One individual from near Jacksonville, Florida, 19 August 2018, lacks the orbicular spot and has a small reniform spot like the Edward Plateau specimens; it may simply be an aberrant stellata. 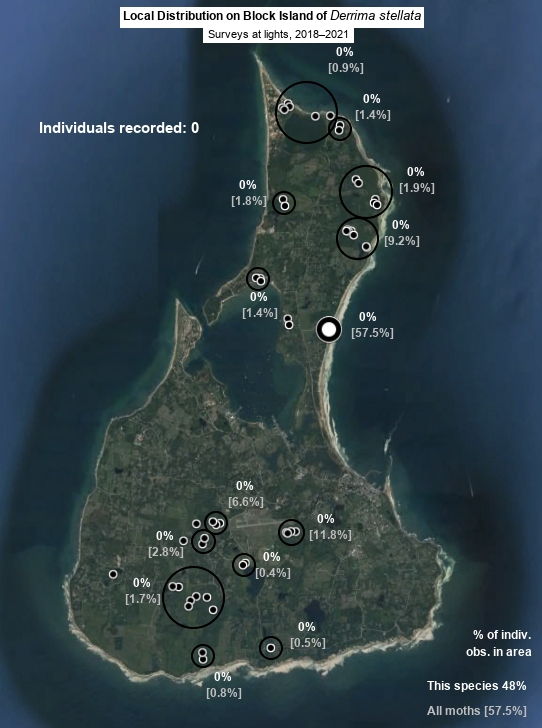